Back to rural Carmarthenshire this week to dogsit my puppy at the family home, with plans to go on some walks, cycles and getting some work done too. Returning to Cynghordy again in the nice weather reminded me of summers I've spent here over the years and some of my favourite places that I enjoy going to.

With the lockdowns, not feeling well, doing my degree, it's been sometimes years since I've visited these places that are just on my doorstep (Relatively, I wouldn't even describe the local shop as truly on my doorstep out here) and I started to think of a list of places I want to return to.

So keep scrolling for a list of great places to see and visit in Carmarthenshire.

Twm Sion Cati may be a familiar name if you grew up in rural Wales, we learnt about him in school, and were told the stories by grandparents. Described as 'The Welsh Robin Hood', Twm was a highwayman by welsh folkfore, from the sixteenth century and supposedly would flee to hide in a cave high up in the mountains near Rhandirmwyn. This cave is now accessible to the public from a footpath that trails around the mountain, carved out in recent years. I remember doing this walk as a child when we used to live near Pontypridd and holiday up in mid-Wales. I remember how nervous my dad would be walking two kids around the cliff-side of the walk, one time slipping himself and taking my brother down with him, just onto the path fortunately. Back then, there wasn't a path built up the cave. Sometimes my dad would slip up into the trees and find it, but it was only years later that I was taking a friend from Bristol around there that I noticed a path going up into the woods that never used to be there. The cave at the very top was great to see, it was a pretty steep climb to get up but definitely worth it. The cave is a little hard to access but I managed to climb in a little and see all the carvings on the walls, some of which apparently date back to the 1800s. After the descent back down to the path, you can then carry on going around the mountain, climbing up onto the rocks and then coming back down and around through woodlands, which if you catch it at the right time will be filled with bluebells. Overall just a really nice, picturesque place, a little bit more than a casual stroll so definitely somewhere I want to try and go to again for the views, the history and the challenge of a walk. Epynt has a bit of history behind it too, a controversial moment in Welsh history when the community that once lived in the mountains was evicted. In 1940, everyone living on Mynydd Epynt was evicted from their homes to make way for a training base, by the Ministry of Defence. This base still remains, as Wales's largest training grounds, and armed forces members are a common sight in the area. I've always found it quite a peaceful place, no phone signal, not allowed to stop the car, and rarely seeing another car over the road. Also a great place to spot some wildlife on the way up into the mountains, I've seen a fox, hares, a barn owl and polecats all in the same weekend. With the lack of housing and people the further up you go, the more the wildlife flourishes.

Aberglasney Gardens is a large plot that features a listed mansion as well as a variety of gardens in different styles, this ranges from flowers and modern styles through to rustic woodlands.

The history of the house is interesting, with it going through a variety of owners throughout its years, dating right back to the 1600s. It was in 1995 that the house was rescued by the Aberglasney Restoration Trust from it's dilapidated state, and turned into the stately home and gardens it is today.

These sorts of places are great to visit, I find I get a lot of exercise done walking around all these gardens so it feels like an exhausting day by the end of it. Stately homes too have a great glimpse into history which I love, we never get to see these historic features in houses all too much anymore. They remind me of school trips when I was younger, it was always the kind of place we would be taken and given a candle-making class by someone dressed as a servant. 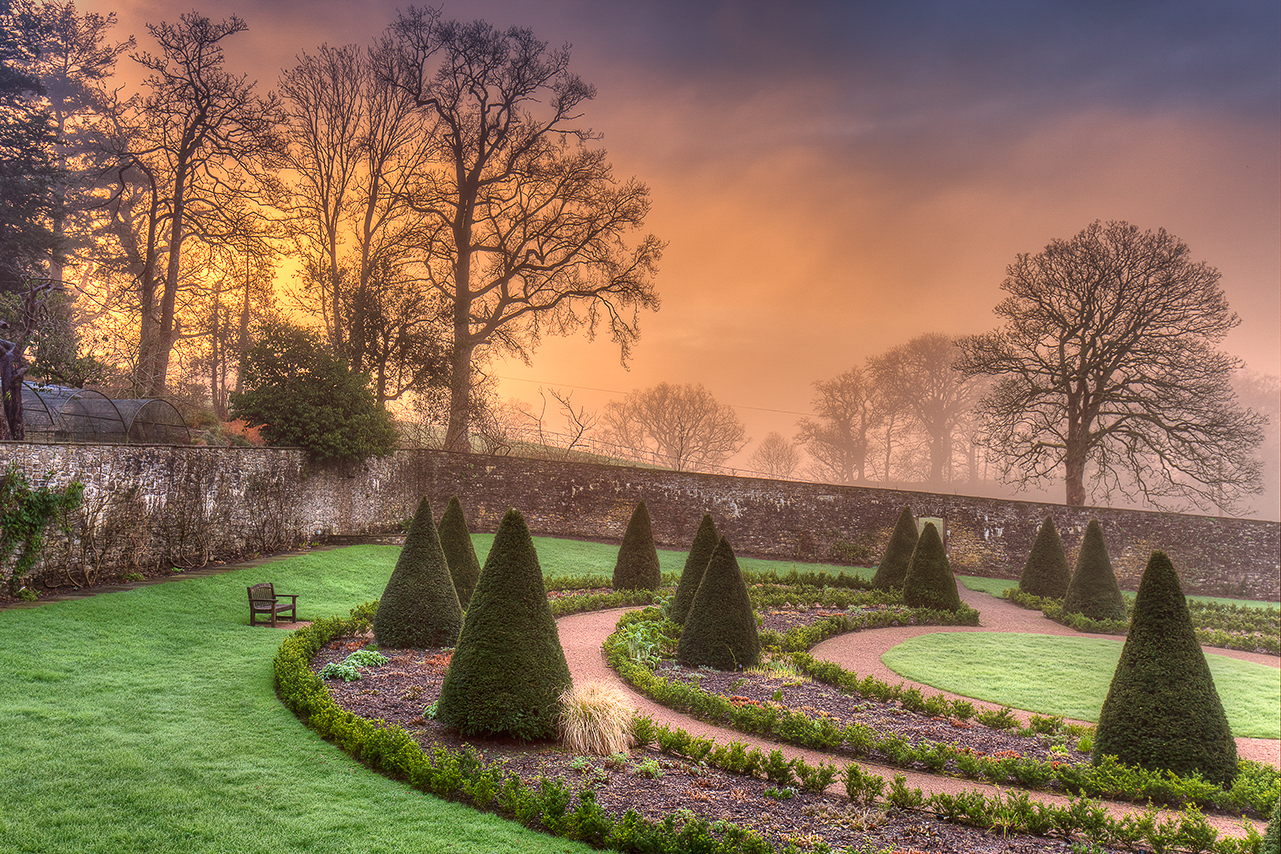 Aberglasney Gardens has a lot of different garden styles as mentioned before, so its a very scenic place and great for taking photos when I was doing research for my art classes, I would definitely love to go back again for this purpose as well as to visit the mansion.

The National Botanic Gardens of Wales are pretty iconic to the area, the giant dome is instantly recognizable and the surrounding land hosts a range of unique areas and wildlife. I visited the gardens a while ago when the Bird of Prey centre had opened, and watched a really cool show of owls and other birds of prey free-flying and feeding. I think animals have got to be a big part of an attraction for me, I went to Folly farm recently and loved seeing all the animals there, literally everything from farm animals to giraffes. The botanic gardens have a range of areas where different plants grow, I'm not so clued up on the histories and things of plants, however I do know they have some quite exotic and rare species of plants, from here and from overseas too.

The glasshouse is one of the biggest attractions of the place, with a huge range of plants inside and actually some quite nice cafes and shops around it. There has also been craft fairs hosted here too.

Dinefwr Castle was probably a place I took for granted, living so close to it and going up there quite regularly with friends. Dinefwr Castle sits at the top of a hill in Llandeilo, the entrance only a few short minutes walk from the town's high street. The path then stretches up through large fields of animals, some woodland, before getting to Newton House, a stately home in the middle of the Nature Reserve and also a large Deer Park. There's more paths again behind that that weave through woodlands, past a few houses where people live on the site, and eventually getting up to Dinefwr castle at the top of the hill. The castle is a ruined graded structure, but does have some features remaining, such as the tower that is accessible where you can view a lot of the land around and also the river Tywi.

I think again here it's the nature aspect of it, the large open fields and the peacefulness of it is what makes Dinefwr a great place to visit. It's also accessible in the evening which is nice, as usually there isn't anyone else around.

Llyn Brianne is a reservoir off a road from Llandovery, which was man-made. It was constructed in the 1960s to help supply the water to a large area around it and has a weaving road that climbs and falls around it through quite dense woodland and forestry. I knew about this place quite a long time before I ever visited, my grandad was involved in the planning of the roads in the area and it was talked about when we used to holiday nearby. It a very pretty place, to walk a little or to drive around, I wanted to visit a few years ago when the heatwave made the water dry up, revealing some quite interesting structures and random objects that had been submerged years ago.

The whole drive takes quite a long time, bringing you out in the town of Llanwrtyd Wells above Llandovery. It's enjoyable but the roads do get pretty slim at certain points, resulting once in me having to reverse most of the way down a cliff side when meeting another car.

I'd like to visit here again and visit some of the nicest spots, but probably something to do in good weather considering how overgrown a lot of it is.

Finally, Lampeter. Lampeter is a small town between Llandovery and the coast, or that's the way I would describe it at least. It's the place I would pass through if I was driving towards the Cardigan coast and also the place where I passed my driving test. I didn't have much to do with Lampeter until my driving, but seeing what a cute town it was, I did a daytrip up there by myself back in 2017 and visited a few places that I found. This includes the quilt museum, a small building tucked into a main street, a few giftshops and artist's shops, and a few old structures, like the old church on a hidden backroad. I remember having a nice lunch somewhere, it was overall a really nice little day out that I would like to do again.

So there it is, a few of my favourite places to visit in Carmarthenshire, which I'm hoping to get back to very soon. Have you visited any?